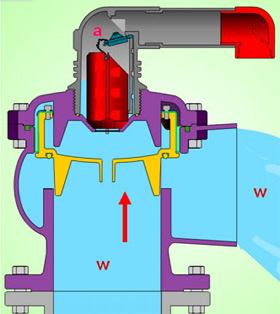 KYPipe has been developing and supporting pipe system hydraulic flow analysis software for over 40 years. PIPE2012 is the most widely used pipe system hydraulic flow analysis software in the world. The strength and flexibility of PIPE2012 has made KYPipe an industry leader and the sophisticated algorithms used to analyze Steady State, Surge, Gas and Steam systems have been endorsed by leading experts in this field.

KYPipe has recognized the value of ARI’s Dynamic Air Valve to effectively prevent surge conditions in a pipeline. The ARI D070 air valve is now modeled within the KYPipe software for designers to use in their pipeline systems.

ARI is an innovative designer and manufacturer of pipeline air management products being used by municipalities and industries around the world. ARI would like to thank KYPipe for their endorsement!

ARI is represented in Canada by infraStruct/Martech. If you would like a demonstration of how ARI’s air valves manage the air in a pipeline, please send an inquiry to the technical sales team.