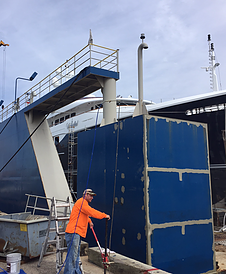 It is inevitable that a seawall or bulkhead will need repair at some point. Sometimes the cost and disruption of an excavation repair or replacement make those options impossible or undesirable. That was the case with the busy Port of Palm Beach. The project engineer approved the use of chemical grouting to address significant problems with the port's seawall. Seawall Doctors of Boca Raton used probe grouting with Prime Flex 920 to solve the problem while saving the port authority tens of thousands of dollars.

Problem: The Port of Palm Beach is the busy base of operations for many different types of businesses. These range from container shipping to cruise ship departures. One of its clients refurbishes luxury yachts. The port engineer found significant cracks in the seawall adjacent to this client’s main work area. The cracks created major voids behind the wall as the tidal activity washed away loose soil.

Solution: Port officials contracted Seawall Doctors to repair the seawall. The company could have done a rehabilitation using excavation and backfill and some type of sheet pile or a cementitious patching of the concrete. However, besides being disruptive to the port’s operations, particularly those of the client in that area, such a large-scale rehabilitation is an expensive proposition. In addition, depending on the repair method chosen, patching might be only a short-term solution.

Seawall Doctors recommended curtain grouting the seawall using Prime Flex 920, an expansive polyurethane foam, to fill the voids, stabilize the loose soil, and seal the cracks in the seawall. When reacted, the hydrophobic foam forms a rock-hard watertight mass.

The crew initially pumped Prime Flex 920 with probes in five locations. This filled the original void, the known cracks, plus fissures underwater that had not yet been discovered. A floating boom contained any reacted grout, which is inert, as it flowed through the cracks in the seawall. Seawall Doctors and port officials chose Prime Flex 920 a crew curtain grouts with polyurethane foam to repair a seawall because it is certified compliant with NSF/ANSI Standard 61 for contact with potable water. Though the waterway is not a source for drinking water, choosing an eco-friendly product to use was an easy decision.

After the initial grouting phase, port officials chose to have additional grout installed to fill other voids and ensure the sealing of cracks not yet discovered.

Outcome: The crew completed the project successfully over three days without disrupting port operations or interfering with the client’s job of getting a luxury yacht back on the water.

The port authority official said this solution saved $100,000 from the other options that were explored.